I’ll be sharing some wonderful neural network architectures for working with sequences of text! Here they are:

Note that GRU’s and LSTM’s are also RNN’s. An RNN is a neural network architecture where the connections between nodes form a time-dependent sequence. Moreover, an RNN utilizes an internal memory for processing sequences in order to recognize patterns in the data. GRU’s and LSTM’s are RNN’s with more complicated architectures encoding inductive biases, allowing them capture more sophisticated patterns in data, unlike traditional feed-forward networks. 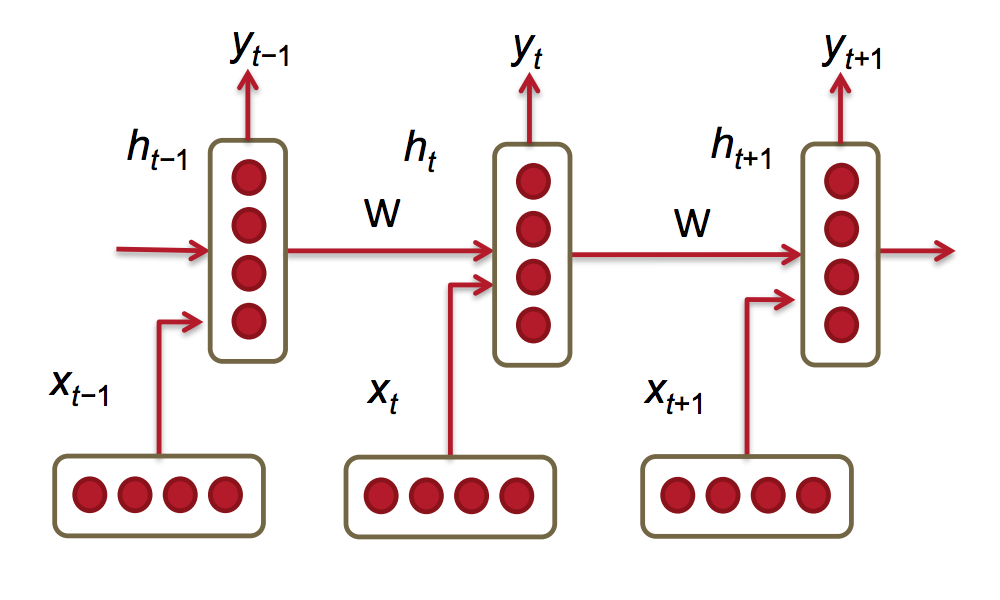 Suppose we wish to to give an RNN some text, in this case the lyrics to touching song, so that it can predict the next sequence of words, in this case so the RNN can keep giving us heartfelt lyrics. Using a vanilla RNN we would start off with a sequence of words represented as a sequence of vectors. Let’s say we have the sentence: “I love you for so many reasons, which means I love you for all seasons” (The Fuzz - I Love You For All Seasons). We would represent this as the sequence , where is a word vector representing “I”, is a word vector representing “love”, is the word at the ‘th time step.

Thus, by feeding our RNN some lyrics to a song, a sequence of words, it could continuously produce another predicted word, and take that as an input to itself to produce another word. With this continuous generation, we could end up with new sentences or paragraphs, or essays or maybe even a book if we let the RNN run long enough!

Since we process data in a sequential manner, representing our previous sequence as a hidden state vector , the inductive bias encoded in this neural network architecture is that we can use what we have seen in the past determine what we might see in the future. This is further encoded in our matrices and . Since we multiply with our past hidden state , encodes what features of the past are important to determine the future. Since we multiply with our current word , encodes what features of the present are important to determine the future.

This model has the right inductive biases for dealing with sequences and is thus successful, but it has very few parameters and thus has less flexibility than a model with more parameters. Moreover, Vanilla RNN’s have something called the vanishing/exploding gradient problem.

will tend towards either zero or an uncomputable number.

Alas, fantastic folks have devised other great models that mitigate the vanishing gradient problem, while incorporating more inductive biases and flexibility into those models! 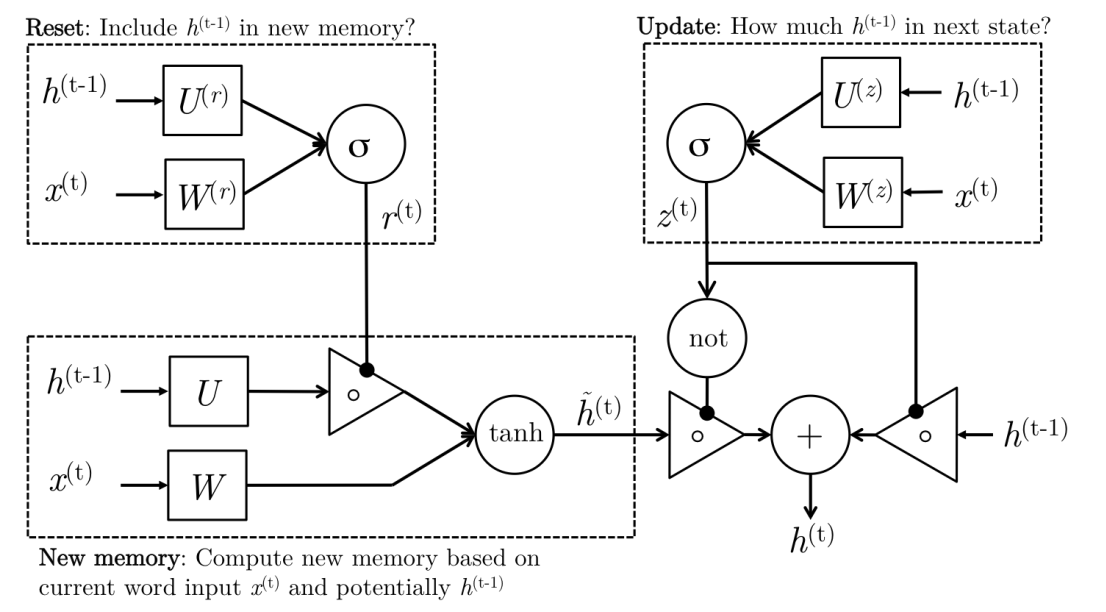 With GRU’s, we processes sequences of text in the same sequential manner, but the model has some extra parameters to it that help alleviate our vanishing gradient problem, all while encoding inductive biases we shall discuss!

New memory is formed by taking our current word in the sequence and determines its importance in the new memory with the matrix. It then utilizes the reset gate and the matrix to determine how important the past sequence is in forming a new memory. By explicitly utilizing including a reset gate and the the matrix, we have a more expressive model that is better able to utilize the important components of the past sequence while discarding irrelevant components.

The update gate is utilized to determine how much our newly formed memory and our past sequence should contribute to representing our new sequence. 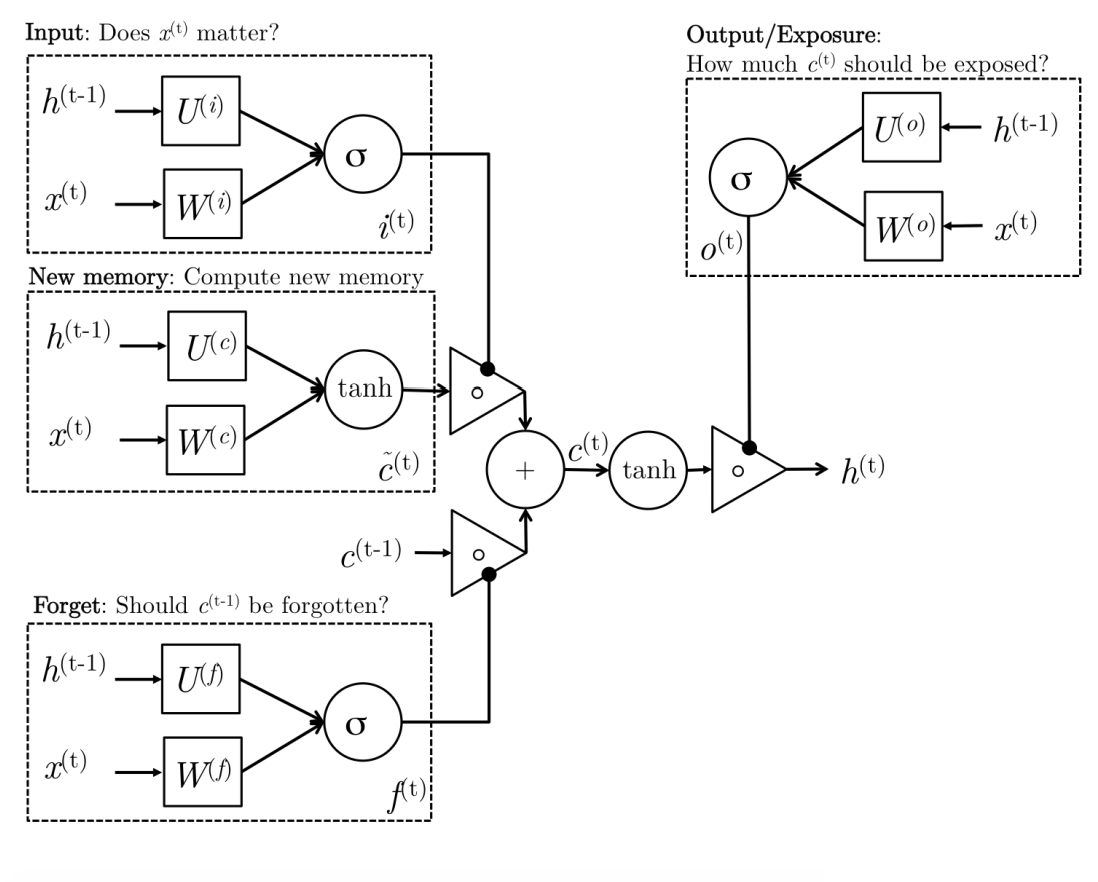 Uses the input word and past hidden state to determine how the new word in our sequence should influence our final new memory formation.

Determines how much the past memory should influence our new final memory formation. Can give us to completely forget what we learned before, or to continue to propagate our past memory!

We form a new memory utilizing our past hidden state representing our past sequence, and the new word we encountered in our sequence.

Our finalized memory is rich in information, so the the output gate determines what aspects of this new memory are important for representing a new hidden state for our current sequence.

The new hidden state new representation of our current sequence!

You May Also Enjoy

After learning about the Transformer and it’s incredible capacity to work with language, I was I excited to integrate it into a tool for people to use. I ha...

Week 5 After reading about wonderful neural net architectures for working with sequences of texts, I decided to try some implementations, complementing my ...

Week 3 I have enjoyed an wonderful breadth of knowledge the past two weeks, and now it’s time to refine my plan and focus! To accelerate my progression, I ...

Week 2: Getting A Groove

Week 2 After kicking this week off, it took some time but I feel that I’ve got a groove I can get with to get things done! I was exposed to a lot of new kn...